At the crux of it all, this chapter deals with the energy changes during reactions. As much as this chapter appears wholly abstract and theoretical in nature, there are many real life applications from understanding chemical energetics, such as burning fuel for energy or predicting the solubility of a solute in a solvent.

There are many new terms in this chapter which would take a while to memorise and practice before you may feel comfortable with them. However, the work to memorize the definitions would pay off in helping you answer not just definition questions but calculation questions too.

Here is the list of definitions you should memorise

What are standard conditions?

ΔHfθ = ∑ BE (bonds broken) - ∑BE (bonds formed)
All products and reactants must be in gaseous state.
Must remember to multiply the bond energies with the number of bonds broken or formed.

Step 1
Draw out the bonds of every reactant and product. This is to make sure you do not miss out any bonds.

Step 2
Count the number of each bond.

Note: Even if the answer is endothermic, the positive ‘+’ sign must still be written.

Given the following enthalpy changes

By drawing a suitable energy cycle, what is the enthalpy change of formation of ICI₃? 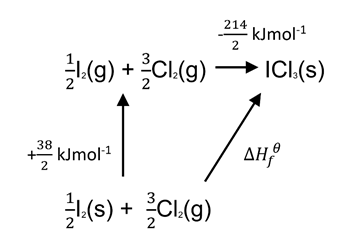 ❏     All Arrows are labelled with enthalpy changes

Construct a Born-Haber cycle for the formation of CaF₂ from its elements. 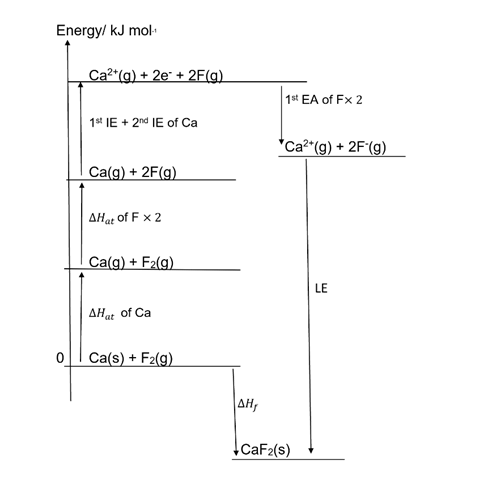 For ionic compounds like CaF₂ above, we can use the acronym FAIEL to check if we have included the necessary equations. Hopefully by using this acronym, you will “fail” to get such questions wrong again.

Do note that this acronym is only applicable to ionic compounds.

Ever wondered why salt dissolves in water? The short answer is that although the ΔHsolθ of salt dissolving in water is endothermic, it is still relatively small enough for salt to be soluble in water. Required heat from the surroundings can be absorbed such that salt dissolves into water.
Generally, the more exothermic the  ΔHsolθ , the more soluble a solute is in a solvent. So, how do we determine the  ΔHsolθ and  hence solubility of an ionic compound in water?

Two stages are involved in the dissolution of ionic compounds,
Stage 1 : The ions are pulled far apart to form separate gaseous ions.
The heat change would be the reverse of lattice energy  -ΔHlattθ since ionic bonds are breaking to form the constituent gaseous ions of the ionic compound. Since energy is taken in to break bonds, this stage is always endothermic.

Stage 2: Solvent molecules, H₂O, form bonds to the gaseous ions to form a solution of aqueous ions. The heat change would be the enthalpy change of hydration, ΔHhydθ. Since energy is released to form ion-dipole interactions between H₂O molecules and ions, this stage is always exothermic. 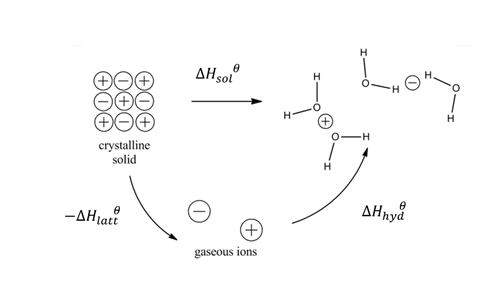 Generally, entropy, ΔS, increases when an ionic compound dissolves in water.
In stage 1, As the number of particles increases, the number of ways to arrange the gaseous particles increases too, thus disorder of the system increases and entropy increases.
In stage 2, as water molecules form bonds around the ions, their positions become more fixed and the number of ways to rearrange the particles decreases. Thus, disorder of the system decreases and entropy decreases.
Since overall entropy depends on both stages, and usually the disordering process in stage 1 is dominant, thus ΔS increases overall.

ΔGӨ = ΔHӨ - TΔSӨ
You can remember this equation using a mnemonic aid, which is the acronym Go Home To Sleep.
Do note that SI units for ΔGӨ and ΔHӨ are in kJ mol-1 while units for ΔSӨ are in JK-1mol-1 and T is in K.

Examples where reaction is in equilibrium and ΔGӨ = 0 would be when a phase change is taking place.

There are limits to ΔGӨ, however.
The spontaneity of a reaction using ΔGӨ is only possible under standard conditions. Also, a reaction might be spontaneous as ΔGӨ < 0, but kinetically too slow for an observable reaction.

Using the above checklist,

Describe and explain how the entropy of the following system will change during the stated process. Assume the pressure remains constant throughout.