This chapter falls back on what we have learnt in Chapter 1, under Redox processes. It is good to have a strong foundation and be familiar with the concepts tested under that chapter.
Familiarity with electron transfer, changes in oxidation state and construction of redox equations is the prerequisite to understanding Electrochemistry.

Electrochemistry can be generally split into two parts. Electrochemical cells and electrolytic cells.

Use the acronym OARC to remember that Oxidation always occurs at the Anode and Reduction at the Cathode, regardless of which cell it is.

There are a few key things to take note about the half-equations in the Data Booklet. Predicting the spontaneity of a reaction

When the Eθcell is positive, the reaction is spontaneous and vice versa when Eθcell is negative.
When the Eθcell is 0 or around 0, the reaction is at equilibrium or reaching equilibrium.
Most questions testing this concept would not present you with the half-equations and accompanying Eθ values for the reaction described. Hence, choosing the right equations from the Data Booklet and knowing which is the reducing or oxidising agent can be overwhelming.
Not to worry, we will break it down into 4 steps for you.

Using the Data Booklet, predict the spontaneity of the following pair of solutions when they are mixed.

Step 1: To make it easier to pinpoint the ions or molecules involved, rewrite the substances in their chemical formulas: Na₂Cr₂O₇ and FeSO₄

Ions present : Na⁺, H⁺, Cr₂O₇²⁻, Fe²⁺, SO₄²⁻
H⁺ is present as an ion as Na₂Cr₂O₇ is acidified. We ignore water as a potential oxidising or reducing agent.

Step 2: Select from the data booklet, half equations with the ions highlighted above.
Do not flip the equations, copy them directly from the data booklet to prevent confusion in step 3, later on. Underlining the reagent would help you better identify the oxidising or reducing agent for the next step.

Cr₂O₇²⁻ is the oxidising agent as it appears on the left side of the equation and has a more positive Eθ than H⁺ and Na⁺. Hence, reject equations 2 and 3.

Since Cr₂O₇²⁻ is the oxidising agent, the ions in FeSO₄ would act as the reducing agent and would be on the right side of the half-equation. Thus equations 5 and 6 should be rejected, since Fe²⁺ and SO₄²⁻ appear on the left side. Since the Eθ of equation 4 is more negative than that of 7, choose Fe²⁺ as the oxidising agent instead of SO₄²⁻. Hence, reject equation 7.

In the ‘O’ level syllabus, the electrolysis of water involves the discharge of H⁺ and OH⁻ ions at the cathode and anode respectively. Water is assumed to self-dissociate, producing H⁺ and OH⁻ ions. While this is true, the concentration of both ions in pure water, as we have learnt in Acid-Base Equilibria, is very low at 10⁻⁷ mol dm⁻³ (25℃).

Unless the electrolyte is acidic or alkaline, which will result in high concentrations of H⁺ and OH⁻ ions, assume that H⁺ and OH⁻ are not present for the purpose of predicting the reactions occurring at the electrodes. 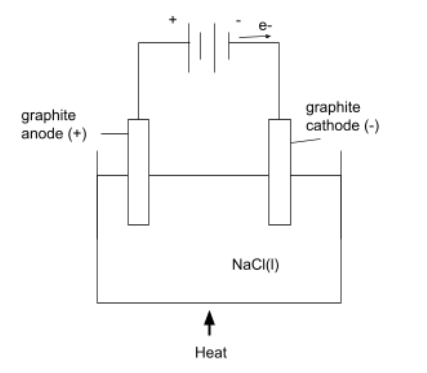 Set up for aqueous NaCl: At the anode, all possible reactions:

Since the Eθ (O₂/H₂O) is more negative than the Eθ (Cl₂/Cl⁻), H₂O is preferentially oxidised.
Thus the reaction at the anode,

At the cathode, all possible reactions:

Thus the reaction at the cathode would be as such:

This real life application of the electrolytic cell is commonly tested. When crude copper is extracted, it contains impurities such as silver and zinc. As we know, copper is used in making electrical wires and purifying copper improves its electrical conductivity.

Take note of the following things,

The set up is as such: Paying attention to the half-equations and Eθ of the possible oxidation reactions:

By regulating the operating voltage such that it is just sufficient for Cu to be oxidised, pure copper can be obtained.

At the anode, as Eθ (Zn²⁺/Zn) is more negative then Eθ (Cu²⁺/Cu), Zn will be oxidised. Hence both Cu and Zn dissolve into the solution as cations and migrate to the cathode.
Meanwhile, since the Eθ (Ag⁺/Ag) is more positive than Eθ (Cu²⁺/Cu), it will not be oxidised and remains as silver metal. As copper around the silver dissolves, it will drop off the electrode and form anode sludge.
Since the Eθ (S₂O₈²⁻/SO₄2-) and Eθ (O₂H₂O) are too positive, SO₄²⁻ and H₂O will remain unoxidised.

At the cathode, since Eθ (Cu²⁺ /Cu) is more positive than Eθ (Zn²⁺/Zn), Cu²⁺ will be preferentially reduced and deposited on the pure copper cathode. Zn²⁺ will remain in the solution.