But more accurately, since the hydrogen ion has a large charge density, it tends to form a coordinate bond with a neighbouring water molecule instead of existing independently. A lone pair of electrons from a water molecule is donated to the empty orbital of the H⁺ ion.

Unfortunately, the Arrhenius Theory has its limitations. It cannot explain why certain compounds such as ammonia behave like bases as it does not contain hydroxide ions.

Yet again, the Arrhenius Theory and Brønsted-Lowry Theory are still unable to explain the behaviour of substances such as BF₃ and AlCl₃, which have no hydrogen atom but behave as acids.

Don’t worry, the Lewis theory does not contradict the Arrhenius Theory and Brønsted-Lowry.
For example,

(i) Identify the two acids and the two bases present according to Brønsted-Lowry theory.

(ii) Identify the acid and base present according to Lewis theory.

Answer:
(i) (a) Acids: H₂O, NH₄⁺
Bases: NH₃, OH⁻
Since H₂O donates a proton to NH₃ it is a Brønsted acid, while NH₃ is a brønsted base. OH⁻ is the conjugate base of H₂O, and NH₄⁺ is the conjugate acid of NH₃.

Base: F⁻
An electron pair from F⁻ is donated to form a dative bond with the B atom of BF₃

(b) Acid: AlCl₃
Base: CH₃Cl
An electron pair from Cl is donated to form a dative bond with the Al atom of AlCl₃.

One of the fundamental concepts of acid-base is the buffer reactions.
A buffer is a solution which pH remains almost unchanged when a small amount of H⁺ or OH⁻ is added to it. This definition is extremely important and should be memorised. There are 2 types of buffers. The table below will provide more explanation of each type of buffer.

❏     Identify the type of buffer (whether acidic or basic buffer)

Let's take a look at worked example 1 to illustrate pH calculations in a buffer solution:

The acid-base titration curves help us to explain and understand the changes in pH during
acid-base titrations better. Students are required to know how to draw the shapes of the titration
graphs based on the given scenarios in the question and/or practical paper 4.

Do note that only 4 possible types of titration curves can be derived from any acid -base titration experiment:

❏   Labelling of axes (pH and Volume of titrant added/cm³)

❏   Indicate the equivalence point(s), and label the pH and volume of titrant added at that point

The following is a summary of the Acid-Base Titration graphs:

We will explain to you in-depth using a sample worked example below to understand it better through application: Phthalic anhydride is the acid anhydride of phthalic acid. It is an important industrial chemical for the synthesis of phthalic esters, which are used as plasticisers to soften plastics.

Hydrolysis of phthalic anhydride produces phthalic acid, which is an aromatic dicarboxylic acid that can ionise in stages. Some information on phthalic acid and another aromatic acid are given below. 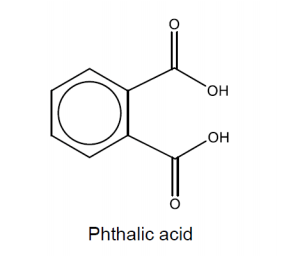 (i) Suggest a reason why the pK₂ of phthalic acid is higher than its pK₁.

(iii) Sketch the pH-volume added curve you would expect to obtain when 50 cm³ of 0.1 mol dm⁻³ of NaOH is added to 10 cm³ of 0.2 mol dm⁻³ phthalic acid. Include relevant details from (ii) on your graph.

Solution:
(i) For pK₁, the H⁺ is removed from a neutral molecule (referring to phthalic acid). For pK₂, the removal of a H⁺ from the anion that already carries a negative charge is electrostatically unfavourable.
OR
Favourable intramolecular hydrogen bonding in the anion will be disrupted when the second H⁺ dissociates in pK₂. (Refer to the diagram below for a better understanding of the second alternative answer.) (ii) Phthalic acid is the limiting reagent / NaOH is in excess

(iii) Step-By-Step Guide:
Firstly, you need to recall what pKₐ is. pKₐ is a way to express the extent of dissociation. The lower the pKₐ, the stronger the acid.

Next, the question mentioned “50 cm³ of 0.1 mol dm⁻³ of NaOH is added to 10 cm³ of 0.2 mol dm⁻³ phthalic acid”, so it is a weak acid-strong base titration. Recall the titration curve shape.

Maximum Buffer Capacity (half-equivalence point):
The horizontal parts of the curve are where Maximum Buffer Capacity (MBC) occurs, which is when [weak acid] = [conjugate base]. In this case, the buffers formed are acidic buffers, thus pH= pKₐ. You need to know that this point occurs at half the volume of base required to neutralise the acid completely.

At every equivalence point, all the weak acid in the conical flask would be completely neutralised. However, strong base NaOH will still be added, so what’s left in the flask is the salt formed and excess strong NaOH base.

Therefore, the titration curve should be as such: Lastly, here is a summary table of the commonly used indicators in acid-base. This table would also be useful in tackling the practical portion of H2 Chemistry.