Before we dive into the chemical intricacies of amines, let us look at some of its important physical properties.

Students must know that amines are Lewis bases in gaseous phase. Its N atom is able to donate its lone pair of electrons to an empty orbital of another atom.

However, amines are Bronsted-Lowry bases in an aqueous solution. It accepts a proton from a water molecule to produce OH- ion, by using its lone pair of electrons to form a dative bond with the proton dissociated from the water molecule.

To compare basicity of amines,

Any group that increases the availability of lone pair of electrons on N atom for donation will increase the basicity of the amine, vice versa.

Relative basicities of the various amines in aqueous solution:

Students need to be clear of what amino acids are and their characteristics.
Properties:

1. Amino acids contain both –NH₂ (amino) group and –COOH (carboxyl) group
2. This is how an α-amino acid looks like:

Where R is either a H or an alkyl group
(Do note that for the ‘A’ Level syllabus, you are only required to know about α-amino acids) Now that we are clear of what amino acids are, let us take a look at zwitterions:

Zwitterion is a particle containing both a positive and a negative ion, and it has no net electrical charge. In other words, it is a neutral particle.

How it is formed: Acid-base reaction occurs internally in the amino acid, whereby H⁺ ion from the acidic –COOH group moves to the basic –NH₂ group. Physical Properties:
- Crystalline solids with strong ionic bonds between the zwitterions. Thus, it has a high melting point. (Recall Chemical Bonding for explanation)

A sodium salt of glutamic acid, monosodium glutamate (MSG), is a flavour enhancer that occurs naturally in tomatoes, mushrooms and some other vegetables. (i) Draw the structural formula of the zwitterion formed from glutamic acid. 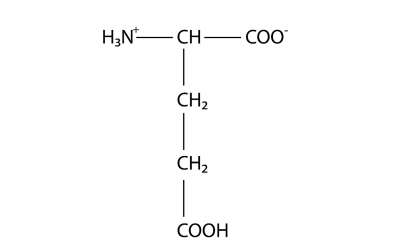 Recall what a zwitterion is and how it is formed. (Zwitterion is a particle containing both a positive and a negative ion, and it has no net electrical charge. H⁺ ion from the acidic –COOH group moves to the basic –NH2 group. )

(ii) Suggest a likely pH for an aqueous solution of glutamic acid.

(iii) Explain with the aid of relevant equations, how glutamic acid can act as a buffer on adding separate small amounts of:

pH remains relatively constant as most of the added HCl is removed by the reservoir of glutamic acid.

pH remains relatively constant as most of the added KOH is removed by the reservoir of glutamic acid.

(iiii) (a) Glutamic acid is a compound of many proteins and peptides. Draw the structural formula of a dipeptide formed between glutamic acid and glycine, NH₂CH₂CO₂H.
Answer:

(b) Name the functional group which is present in the dipeptide but not in the amino acids.
Answer: Peptide