Firstly, let's take a look at some of the important physical
properties of both carboxylic acids and acyl chlorides. Carboxylic acids are weak acids due to partial dissociation in water. However, they are more acidic than alcohols and phenols.

There are mainly 3 factors affecting the acid strength of a carboxylic acid:

Let's look at a worked example below:

When compounds W, X and Z are added to separate portions of water, solutions are formed with pH 0.5, 2.5 and 3.0 (not exactly in that order). When aqueous silver nitrate is added to these three solutions, two show no reaction but the third one produces a thick white precipitate.

(i) Suggest, with explanations, which pH value is associated with each of W, X and Z. Explain the formation of the white precipitate.

For Z, the presence of the electron withdrawing Cl group bonded directly to the C atom makes the C atom more electron deficient. Hence Z is the most reactive and likely to give up a proton, the C-Cl bond undergoes hydrolysis in water to form HCl, a strong acid. The white ppt of AgCl is formed when AgNO3 is added.

W and X are both R-COOH, hence are weakly acidic and have a higher pH than Z

For X, the presence of an electron withdrawing Cl group further disperses the negative charge
on the ion of X, hence stabilizing the conjugate base further. POE of X’s dissociate lies further to
the right and it is more acidic than W.

(ii) Predict with a reason the likely pH value of an aqueous solution of compound Y.

Y had one more Cl atom than X. The presence of another electron withdrawing group further disperses the negative charge on Y’s ion, hence stabilising it's conjugate base further. POE of Y’s dissociation lies further to the right than that of X, thus it is more acidic than X.

Now, let’s look at a worked example below:

Each test must only react positively with one of the compounds.
You should also state what you would observe for each compound in each test.

Firstly, compare and note down the differences between the 3 compounds. Recall the distinguishing tests that are unique to deduce certain functional groups attached to a compound. Tip: Drawing out the structural form of A would help you to visualise better and identify the functional groups present clearly.

We have previously provided a diagram detailing the chemical reactions of carboxylic acids. Acyl chlorides similarly has various reactions it can take part in. The diagram below shows such: Last but not least, esters are sweet-smelling compounds that can be formed from both carboxylic acids and acyl chlorides. The main reaction undertaken by esters is hydrolysis (be it acidic or alkaline). The diagram below will sum up the various hydrolysis reactions: 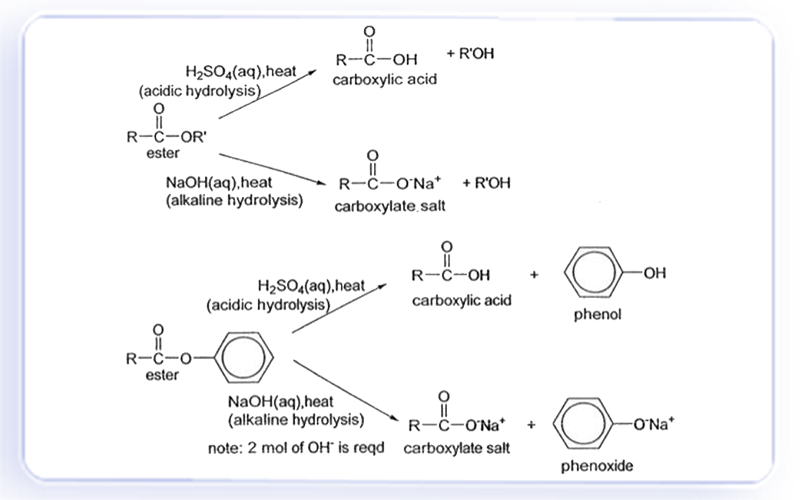