Take a look at the Tri-iodomethane Test (also known as Iodoform Test):

R can be a H, alkyl or aryl group.

Tip: Equation above should be memorised! The time taken to recall and balance this equation could have been better spent on other challenging questions during the exam.

Note: This iodoform test can help identify the presence of a CH₃CH(OH)– group

The following table below would clearly summarise the 3 golden tests to distinguish alcohols from other organic compounds:

Aldehydes, which will be introduced in the next chapter, can be formed from primary alcohols through controlled oxidation. As the primary alcohol is heated, the resultant aldehyde formed is immediately removed by distillation to prevent further oxidation to carboxylic acid.

Normally, organic reactions take place with heating under reflux to increase the rate of reaction. Since organic compounds commonly are volatile, they vaporise easily when heated, hindering the reaction from proceeding. Hence when heating under reflux, the attached condenser will condense any vapour, preventing reagents from leaving. 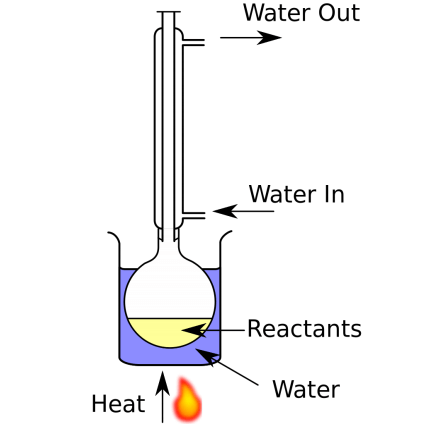 In a controlled oxidation of a primary alcohol to an aldehyde however, heat with immediate distillation is used. The reaction mixture is warmed to a temperature above the boiling point of aldehyde but below that of the alcohol. Hence the aldehyde distils once it is formed, preventing it from being further oxidised to a carboxylic acid, while alcohol is left behind. Relative Acidity of Phenols and Alcohols

This is an extremely important concept to understand. Pure memorisation does not completely work as exam setters tend to include this concept into an application context-based question, so it requires students to answer according to the question. Hence, we would highly recommend students to grasp this concept through understanding rather than memorisation.

Firstly, you need to know that phenol is a weak acid.
Comparing the relative acidities:

However, the pKₐ is the opposite:

Also, do recall the Le Chatelier’s Principle from Chemical Equilibria:

The more stable the conjugate base, Position of Equilibrium shifts further to the right. Thus, more H⁺ is formed.

Let’s take a closer look at the various conjugate bases:

Condensation of phenol is only able to take place with an acyl chloride. Take note that phenol does not react with carboxylic acid to give an ester, unlike alcohols.

The difference in solvents used can be tied back to the differences in the nature of aromatic and aliphatic compounds.

Since the base is chosen to serve as a solvent, it should not cause additional reactions such as the hydrolysis of the acyl chloride involved. Aliphatic acyl chlorides undergo basic hydrolysis with NaOH too easily, since NaOH is a strong base. Hence a weaker base such as pyridine has to be used as the basic solvent.

On the other hand, since aromatic acyl chlorides are more resistant to hydrolysis due to the aromatic ring, NaOH can be used as the solvent. The benefit of a stronger base is that a stronger nucleophile, phenoxide anion, can be produced instead of phenol.

Alcohol B has esters which are responsible for the flavours of various fruits and has the molecular formula C₅H₁₂O. Reaction of B with acidified potassium dichromate(VI) produces a compound C,C₅H₁₀O₂. Heating B over Al₂O₃ produces D, C₅H₁₀. Vigorous oxidation of D forms 2-methylpropanoic acid, CH₃CH(CH₃)CO₂H, as one of the products.

Suggest the structures of B, C and D.

Draw out the structure of 2-methylpropanoic acid to visualise better. 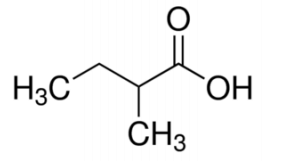