Unlike its alkane counterpart, halogenoalkanes are polar compounds (due to electronegativity difference between C and X) hence there exists permanent-dipole permanent-dipole interactions between the molecules.

The table below will list some of the important physical properties of halogenoalkanes that students should take note of:

There are two different types of nucleophilic substitution reaction. Whether a halogenoalkane undergoes SN1 or SN2 depends on two factors.

Let’s take a look at the mechanisms for both SN1 and SN2 nucleophilic substitution reactions before discussing which types of halogenoalkanes typically undergo which of the two reactions. 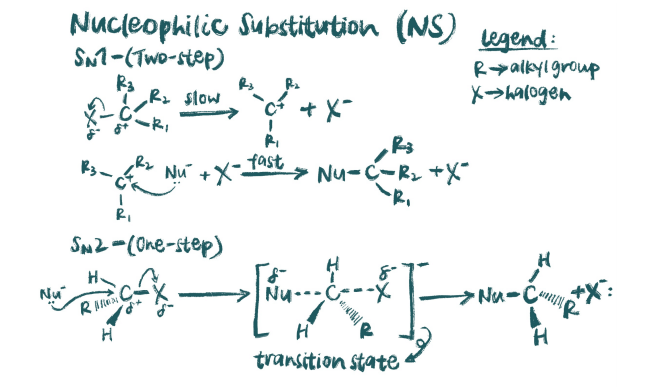 ❏     The slow step and fast step are labelled

❏     One curved arrow from the lone pair of electrons on the oxygen atom to the carbon atom.

❏     Charge on transition state (based on nucleophile)

❏     Inversion of stereochemistry of the product

Why some halogenoalkanes tend to undergo SN1 mechanism

Hence the most stable carbocation, i.e. the carbocation of a tertiary halogenoalkane, would predominantly undergo SN1 mechanism.

And others tend to undergo SN2 mechanism

Now, let’s apply the above knowledge we have acquired to the question as shown below:

2-iodobutane is converted to its corresponding alcohol by heating with aqueous sodium hydroxide.

The rate equation is:

Describe the mechanism of this reaction. In your answer you should show all charges and lone pairs and show the movement of electrons by curly arrows.

Solution:
Firstly, always label the type of mechanism that you will be drawing.
We can deduce from the 2nd order rate equation. Since the reaction rate is dependent on two species, [Nu⁻] (In this case, [OH⁻]) and [RX] (In this case, [2-iodobutane]), it is therefore a SN2 mechanism.

Use the SN2 checklist to ensure you secure full marks for mechanism drawings.

❏     One curved arrow from the lone pair of electrons on the oxygen atom to the carbon atom.

❏     Charge on transition state (based on nucleophile)

❏     Inversion of stereochemistry of the product

Sometimes a question may present you with information about the rate law or energy profile diagram of a reaction, but not tell you if it went through SN1 or SN2 mechanism. It is good to then know the respective rate laws and energy profiles of each mechanism.

Take a look at another worked example:

Draw a fully labelled reaction pathway diagram for the reaction between 2-iodobutane and sodium hydroxide shown in Worked Example 1. Since this is an SN2 mechanism, the energy profile diagram should have the following labels:

❏     Graph should only have one curve (one-step process)

Another detail to remember is the different stereochemistry of the products from the two mechanisms.

SN1 mechanism results in a racemic mixture of products, hence the whole mixture does not rotate plane-polarised light.

SN2 mechanism results in an inverted configuration, hence the product will rotate plane-polarized light in the opposite direction.

Note: If the question only asks for one reason, state the partial double bond character reason.